This is to assist owners of collectable film cameras with the knowledge to be able to to fit a Sony Nex 14 or 16 mp CMOS Sensor into the film rectangle area, at near to exact, the crucial Film Plane depth. The inserted sensor should still be clear of the shutter enabling your film camera to take perfectly in-focus digital photos by fitting a Sony Nex to the rear of the film camera as the "Electric Film".

I have tested the clearance on the following cameras so am fairly confident that it will apply to all 35mm Film Cameras. Tested - Leica M3, Leicaflex SL2, Canon A1, Nikon FE, Nikon FE2.

With a digital sensor it is hard to ascertain just where the Film Plane location is. On my tests and trials with the "Electric Film" conversion of a Nikon FE (see my blog and youtube video), I was able to accurately rebate a Sony Nex Exmor Sensor into the film plane and achieve perfect focus at F1.8 over varying distances, including infinity. This involved sanding the rebate and retesting the sensor with pictures until the perfect focus was obtained. It also involved relocating the sensor infra red and AA filter combination to the inside of the film camera up against the camera shutter behind the mirror (Youtube Nikon FE Digital).

The following pictorial shows the process to follow with the adjustments to the CMOS Sensor to fit it into the Film Plane. To dismantle the Sony Nex just Google your model and there are various websites that will show the process.

For all instruction pages for mounting a Sony Nex to an SLR, go to  https://digitalfilmcams.wordpress.com

This is the1980 model Nikon FE film camera fitted with a Sony Nex 3 "Electric Film" back used to take all the photos in this pictorial.

Upon removing the Sensor from the Sony Nex the first job is to reduce the width of the underlying glass over the actual sensor. You will see this as a clear glass below the Infra Red filter combo that has a width of approx 24.6mm. This needs to be less than the film rectangle vertical width in your film camera (which is approx 23.90mm) so the sensor can drop into this rectangle and be at the critical Film Plane. I found that an easily accessible tool for this is a diamond encrusted knife sharpener that has a fairly sharp edge. Using this with a firm but gentle action resulted in the sanding back of this glass to a width of approx 23.75mm in about 20 minutes.

At this point you may like to remove the filters prior to sanding down the rebate of the circuit board. That way you are less likely to slip and run the filters over the sandpaper so destroying them. Once the filters are removed the small frame over the sensor will protect it from any such accident. But you will get some dust on the sensor requiring cleaning off later.

The sensor needs to be rebated to about half the thickness of the circuit board edge. I fitted my first sensor to the Nikon when at a thickness of 1.08mm. It was focussing quite well but I then blueprinted it by sanding it in situ on the film back which I wouldn't recommend as the dust drops into the connections and stops the sensor from working till you blow it out. You may like to sand the rebate down to say 1.04mm which is probably more like where mine is now.

The best tool is a craftwork scalpel knife as they are thin and sharp. Start by scraping a line around the glue line below the lower blue IR glass (Or where the plastic mount sits on the sensor covering glass). Then start gently pressing in the knife point into the glue and move it say 1mm and repeat till you have done the perimeter. Keep doing this combining with some scraping along the line gradually pushing the knife deeper. Eventually you will be able to start pulling the knife blade along and through the glue line particularly down 3 sides. Then the filter will start to lift and you can just ease it up. Try not to push the sticky glue over the filter glass as it is hard to clean off. You should have released the filter within 15 minutes so just take your time.

When cleaning the glue off the filter for every wipe use a new bit of lens paper and lens cleaner and wipe away to the edge. Never wipe again with the same bit as this smears sticky glue all over the filter and is hard to clean off.

The clear glass frame can be used instead of the Infra Red AA filter combo for some dust protection but it is not necessary if shooting in infrared without. I have made a similar frame for the IR Filter combo but with a head piece to the frame.  In another page on this blog I will go to a lot more detail on the size of these filter frames and how to insert them into the SLR behind the mirror.

The raised frame on the sensor can easily be removed with the craft knife and the glue left behind cleans off with some alcohol based lens cleaner. I advise that you should remove the black frame as I found it did cause the shutter blades to strike it when mounted on my Nikon FA.

Whilst rubbing back the covering glass in situ so that this digital back would fit on my Nikon FA and Nikon FE2 I have also increased the depth of the rebate so sinking the sensor further into the film plane. The result has been a dramatic improvement in focus without the IR Filter in place. Since I have removed the filter mounting frame it is a lot easier to give you a measurement of the depth of the rebate as measured from the face of the covering glass with the extender point on the bottom of my callipers.

The average rebate depth from the glass is now approx 1.50mm.

,I have measured the cameras I have here to give you a guide as to what various cameras have in the way of clearance from the film rails to the shutter curtains edges or shutter blade hinges.

So you can see that it is imperative that the filter mounting frame should be removed from the glass over the sensor.

I trust this page has been useful for you and that you will enjoy the conversion of your old SLR camera to "Electric Film" as much as I have. 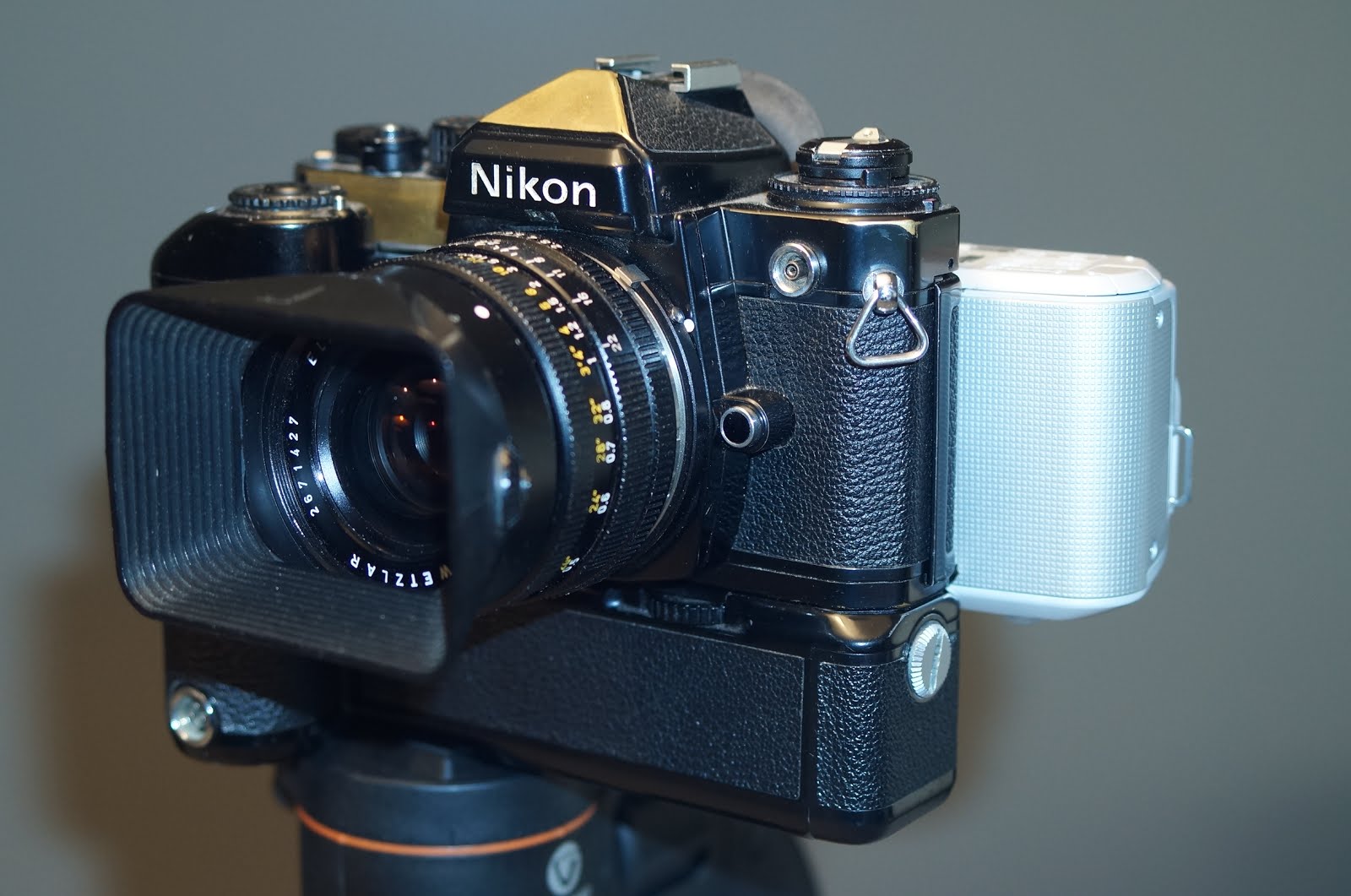 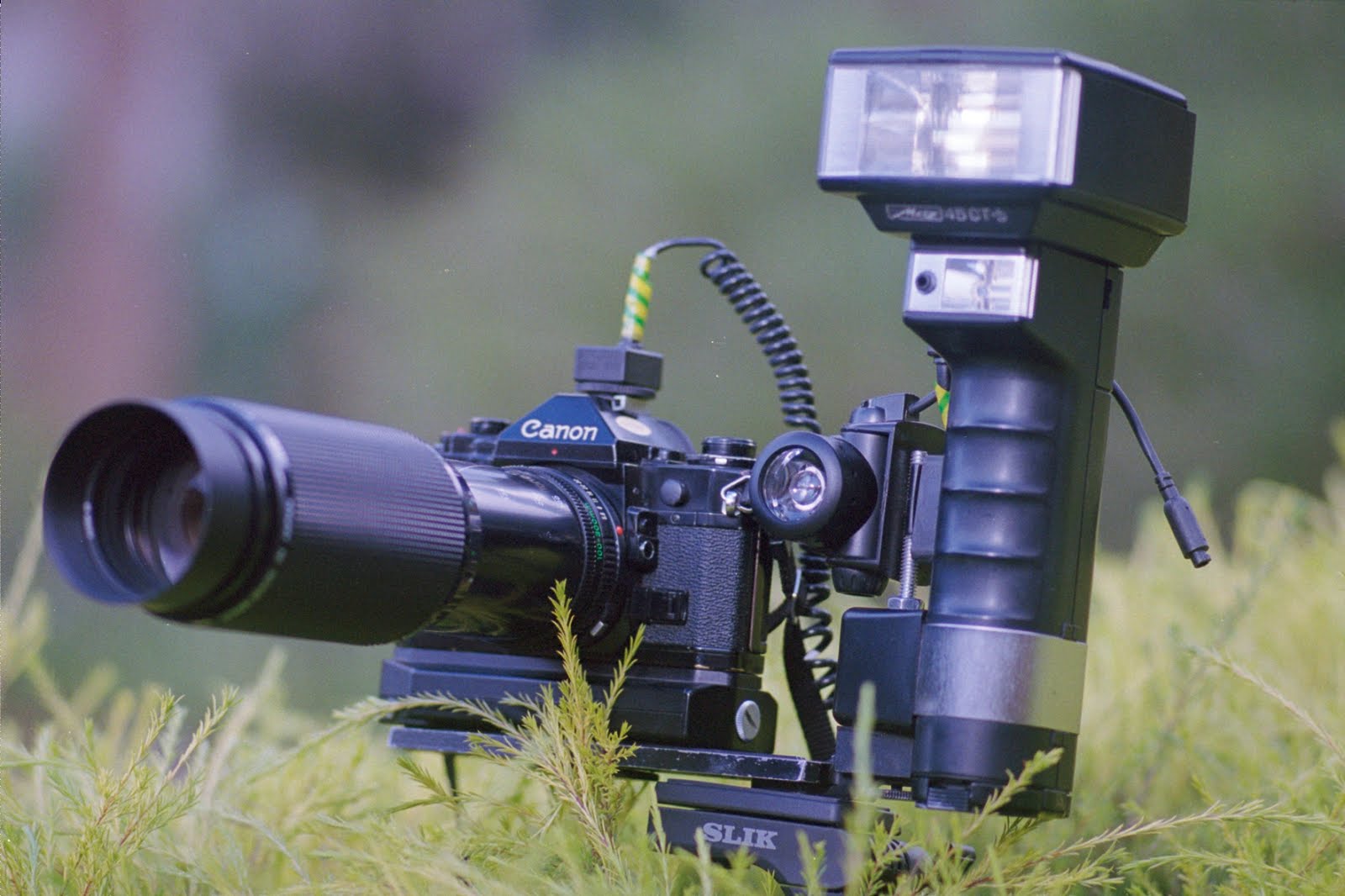